Buy this product to earn up to 60 AAA Points.

At Faction Labs, we REFUSE TO BE ORDINARY! It is this mindset that ensures we achieve our mandate to deliver the most effective, best tasting and highest quality products available. The Faction Labs Formulated Caffeinated Beverage DISORDER® is without question the industry benchmark, so whatever the objective, take yourself to the next level with Faction Labs DISORDER®.

Participates in the synthesis of Nitric Oxide (NO) and phosphocreatine and oxygen metabolism of glucose, thereby increasing the uptake of oxygen, glucose, amino acids and creatine, and energy production through muscle cells. It reduces the concentration of lactic acid and ammonia in the muscles, thanks to which it allows the body to recover energy faster by increasing the level of creatine phosphate and ATP resynthesise. Citrulline malate is a much more effective form than high doses of arginine, as it is its precursor. At the same dose as arginine, it is more effective in increasing its amount in the body than arginine alone

Is necessary for the production of carnosine and building blocks that help prevent aging. The compound supports the proper functioning and development of muscles. The amino acid is known to reduce muscle fatigue, which can help your muscles work better during training. This in turn promotes muscle growth. Beta-Alanine is especially helpful in intense short-term workouts such as weight lifting. Some people taking beta-alanine may notice a slight tingling sensation known as paraesthesia. Tingling occurs because beta-alanine dilates the blood vessels, allowing more oxygen and blood to be delivered to the muscles

Acetyl L-Tyrosine is a popular dietary supplement used to improve alertness, attention and focus. Supplementing with Tyrosine is thought to increase important brain chemicals, which affect your mood and stress response.

Alpha GPC is an advanced choline compound that can enhance brain metabolism to improve focus, memory, cognitive response, and sports performance. This unique compound works effectively because it efficiently reaches the brain.

L-theanine works by raising alpha waves and increasing neurotransmitters, enabling a calming effect to reduce anxiety without any detrimental effects on mental performance. If you’re a bodybuilder who takes a pre-workout supplement with caffeine, L-Theanine can help offset its stimulatory effects.

Theobromine has stimulating properties that you can “feel”, similar to caffeine, resulting in improved focus, energy, motivation, and ability to concentrate during exercise.

A plant alkaloid which acts on the central nervous system. It blocks the activity of monoamine oxidase B (MAOB), responsible for the breakdown of catecholamines. Hordenine prolongs the effects of neurotransmitters, thereby enhancing concentration and cognitive functions.

A natural occurring chemical found at high levels in the peels of citrus plants like bitter orange. Synephine displays the ability to suppress the appetite and elevate energy levels throughout your workout.

Mix 1 scoop in 800ml of chilled water. Consume 15-20 minutes before training. Do not consume powder or more than 1 serving per day. Store in a cool, dry place below 30 degrees Celsius. Do not expose to excessive heat or moisture.

Be the first to review “FACTION LABS – DISORDER” Cancel reply 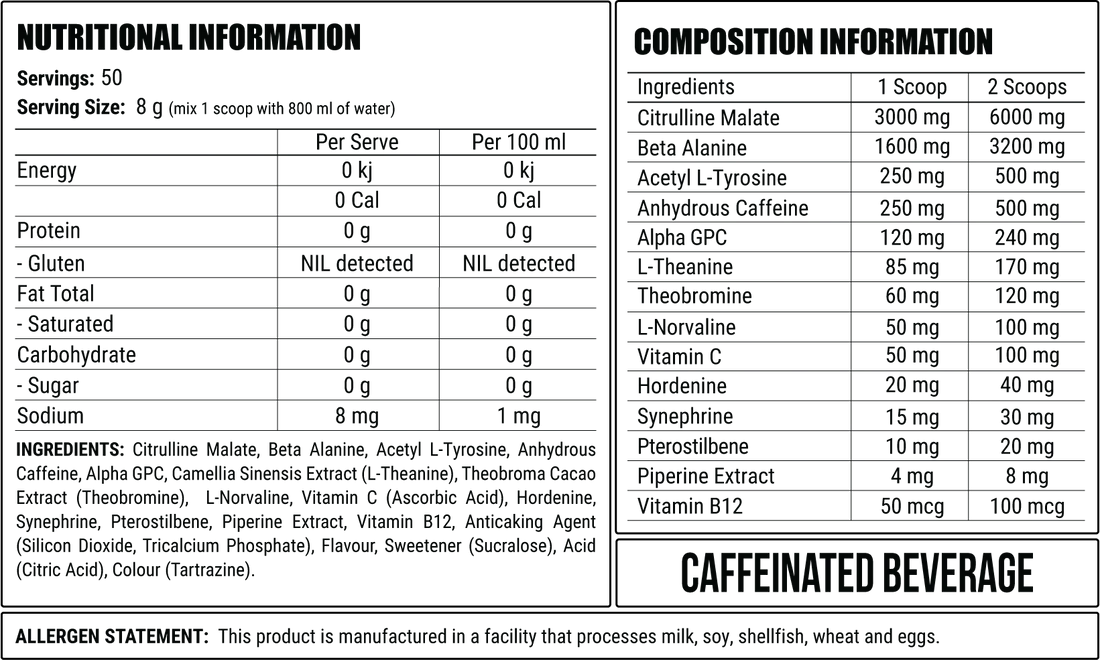