Buy this product to earn up to 45 AAA Points.

Designed for hardcore users, The Shadow!® is the next step in the pre-workout evolution.

A full powered pre-workout with unsurpassed energy, hypnotic intensity and superhuman strength will put you in a training zone unlike anything you’ve experienced before. The Shadow! will show you no mercy!*

Enter the shadow zone and find out why this is the hottest new pre-workout to hit the market in years.

Vitamin B6 (as pyridoxine hydrochloride)

Vitamin B6, also known as pyridoxine, is a water-soluble vitamin that your body needs for several functions. It’s significant to protein, fat and carbohydrate metabolism and the creation of red blood cells and neurotransmitters (1). Your body cannot produce vitamin B6, so you must obtain it from foods or supplements.

An essential B vitamin (B9) that plays an important role in DNA and RNA synthesis, production of red blood cells, cardiovascular health, mood, mental functioning and maintenance of the nervous system. Adequate levels of folic acid help to maintain low levels of homocysteine, which in turn supports nerve cells in the brain that produce dopamine. It is found that as exercise intensity increases, consuming more folic acid can contribute to lower homocysteine plasma levels.

Vitamin B12 (as Methylcobalamin)

Vitamin B12 assists in metabolizing protein and fat. As a bodybuilder, you need the amino acids from the protein metabolism to repair and build your muscles and the fat as a source of energy. Vitamin B12 is also essential for the production of red blood cells, which are necessary for delivering oxygen to those muscles. This nutrient also supports healthy neurological function, which is needed for muscle control.

Is necessary for the production of carnosine and building blocks that help prevent aging. The compound supports the proper functioning and development of muscles. The amino acid is known to reduce muscle fatigue, which can help your muscles work better during training. This in turn promotes muscle growth. Beta-Alanine is especially helpful in intense short-term workouts such as weight lifting. Some people taking beta-alanine may notice a slight tingling sensation known as paraesthesia. Tingling occurs because beta-alanine dilates the blood vessels, allowing more oxygen and blood to be delivered to the muscles.

Leucine an essential amino acid. Of all the Branched Chain Amino Acids Leucine is the most abundant and most important. Research has shown that Leucine’s major role is as a protein synthesis regulator and if you add Leucine to a high protein meal you can increase protein synthesis by up to 40%. L-Leucine can be used in conjunction with meals that are already high in protein to help accelerate the recovery of muscles. Many athletes add extra Leucine to their diet to help reduce the breakdown of muscles during training and to reduce the soreness of muscles after training.

Increases Nitric Oxide levels which may lead to increased strength and endurance, through the increase in blood flow, glucose uptake and oxygen delivery to the muscles.It may also produce positive effects on muscle by stimulating protein synthesis and decreasing amino acid breakdown.

The active ingredient in beet roots, increases energy, power output, and improves blood flow. Beta alanine has been repeatedly proven to raise the levels of muscle carnosine in the human body, which has the effect of increasing the amount of work athletes can perform in high-intensity workouts. Its use is accompanied by a distinctive “tingling” sensation in the muscles.

A processed, dehydrated form of caffeine. Caffeine crosses the blood-brain barrier easily, making it a very psychoactive substance. Inside the brain, caffeine counteracts the substance adenosine. Adenosine is responsible for inhibiting nervous system activity. Caffeine binds to the adenosine receptors and essentially stops adenosine from putting the brakes on neural activity.Caffeine also boosts epinephrine, dopamine and serotonin. In general, users of caffeine have more energy, more alertness and less fatigue.

Olive leaf extract helps prevent LDL (bad) cholesterol from building up in your arteries. This effect helps increase blood flow and lower blood pressure, reducing your risk of heart disease while also having a positive effect on pump and blood flow.

Be the first to review “JNX – THE SHADOW!” Cancel reply 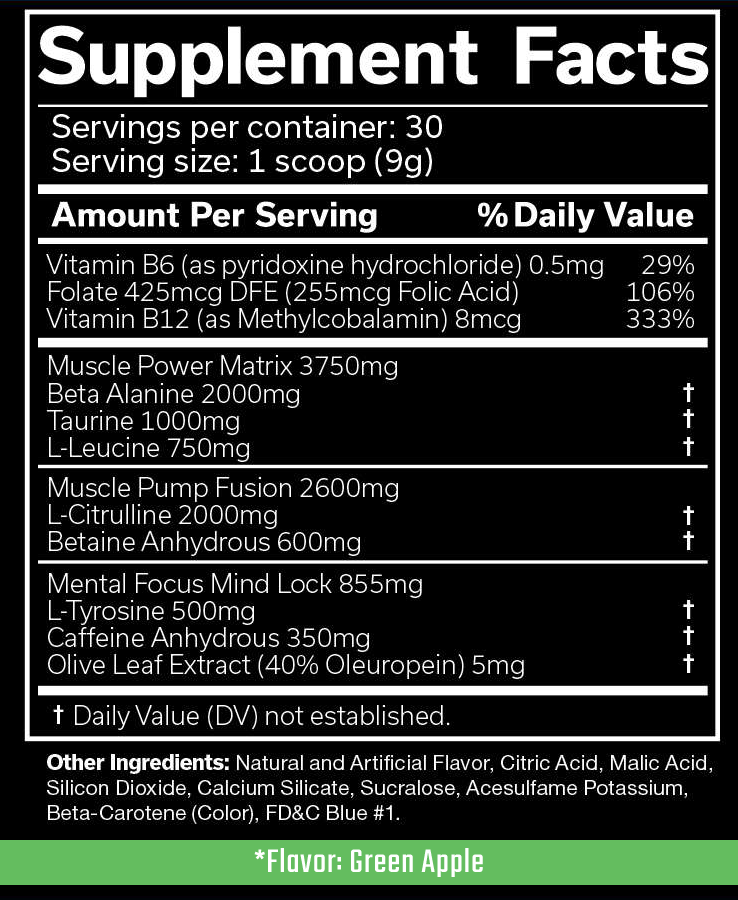