Buy this product to earn up to 69 AAA Points. Lipoflux by Vanguard Science is an advanced fat loss targeting support formula combining first to market innovative complexes and clinically researched herbal extracts. Through adopting advanced pharmaceutics these complexes have been formulated and prepared their own chemist aiming to directly optimize the active components as well as indirectly enhance the entire formula. The combination of these ingredients is both complementary and synergistic in supporting the major processes for accessing and using stored fat energy during a calorie deficit, whilst also supporting energy, mood and appetite.

“The fat cell is like a bank: a place to store excess (caloric) in times of plenty, and from which one can withdraw savings during ‘lean times’…” ) -Collins (2012)

The β-adrenoceptors are one of the key biological gateways to the mobilization of stored fat. (1)

This Vanguard Science first to market complex is included with intent to exploit this pathway. Tinospora Crispa contains a spectrum of polyhydroxylated benzylisoquinoline alkaloids bearing experimental and clinical evidence indicating the capacity to activate the β-adrenoceptors. (2-6)

These alkaloids appear to have very short biologically active effects when administered as the plant extract or as solo isolated ingredients alone- which may significantly limit the desired effects.

Vanguard Science tackles this issue with unique innovation, using a complexation with a terpene extract of Origanum Vulgare. This complex may selectively and potently inhibit one major arm of the alkaloids metabolism aiming to extend both the amount that can be used as well as the time in which it can be used.

This unique component is included with an aim to support energy balance through appetite regulation and by augmenting beta-adrenergic fat mobilizing and utilization.

The lipid fraction of Theobroma Cacao extract contains a spectrum of fatty acids that mimic signalling amides that naturally occur in the body (7).

One of these fatty acid amides, and ethanolamide, has been demonstrated to be a key regulating agent that, among other beneficial targets that regulate energy homeostasis, can turn on satiety mechanisms at the gastrointestinal, liver and (indirectly) at brain level (8-11) . Evidence indicates that the production of this fatty acid amide naturally surges upon feeding (12). It is suggested this compound may exert these effects by acting as a very potent activator of PPAR‐α and fatty acid translocase and by increasing dopamine signalling through oxytocin and histamine (9-11,13). Through the former of these targets, it has also demonstrated to stimulate lipolysis and fatty acid oxidation and to enhance beta-receptor mediated energy expenditure in fat tissue (13-14).

This industry first Vanguard Science complex is used with the aim to augment and regulate the psychostimulant and energy effects of the caffeine component as well as the delay the breakdown of the Tinospora alkaloids.

The C-glycoside tetrahydroxyxanthone fractions contained at high levels in Anemarrhena bear experimental and clinical evidence demonstrating capacity to both augment adrenergic and dopaminergic signalling through inhibiting a common metabolic pathway for these neurotransmitters as well as other compounds. (15-20) It is believed that it is through this pathway that this extract can provide central nervous stimulatory actions as well as augment other actions of the plant extract. (15-18)

This same pathway is common for both the downstream signalling that gives caffeine stimulant-like actions as well as the breakdown of the alkaloids in Tinospora Crispa. (19-23)

These type of xanthone molecules found in Anemarrhena asphodeloides extract are notoriously non-soluble- which can affect bioavailability and other kinetic parameters such as mucosal permeability. (24,25)

Cyclodextrin complexation presents a special ability to form a stable unity with a variety of guest molecules enabling increasing solubility, stability, and bioavailability of certain hydrophobic compounds. The Vanguard Science exclusive complexation mimics that which has been proven in numerous preclinical trials. (23-26)

This unique extract aims to complement the complete formula by amplifiying the terminal steps in accessing and utilizing stored fat as energy.

This marine plant contains a spectrum of xanthophyll carotenoids (27)- some of which hold direct clinical evidence demonstrating capacity to increase resting energy expenditure (28) . A high concentration of a specific xanthophyll can be found in Undaria pinnatifida which is characterized by a very unique molecular structure that sees the body metabolize it differently to other unique types of carotenoids (29-31). The actions of this parent carotenoid as well as the production and tissue storage of the unique metabolites is purported to be paramount the clinically evaluated anti-obesity effects that see it distinct from other molecules in it’s class (27,29-34).  The metabolites have been shown to potentially increase the gene expression of fat metabolizing enzymes (3&6) and the parent carotenoid may directly stimulate uncoupling protein-1 expression in fat tissue (34,35). This protein holds a key regulatory role in the amount of energy release in fat tissue as heat and it production may prolong the lipolysis instigated by beta-adrenergic signalling (36).

This specific component has been included in the Lipoflux formula with an aim to increase the presence of the natural beta-receptor ligand noradrenalin, to produce a prolonged second and third phase activation of these receptors so as to increase energy expenditure and increase fat oxidation .

Evidence that capsaicinoid ingestion may have desirable metabolic outcomes via increasing energy expenditure and fat oxidation (37-40,51). Capsaicinoids can bind to Transient Receptor Potential Vanilloid-1 receptor (TRPV1) a nerve channel that is primarily involved with pain signalling(40,43-44). Upon activation of this channel a signal produces a signal through the spinal cord (45) and then outward from the brain leading to an increase in noradrenaline and dopamine release from the adrenal medulla (42,45-46). Noradrenaline can then bind β-adrenergic receptors increasing expenditure and thermogenic activity (45-47).

The pungency of many capsaicinoids is such that both acute and prolonged use can inevitably cause gastric distress (49). The fraction of Capsicum Anuum extract within Lipoflux uses a non-pungent analogue with a 18 carbon akyl side chain. This analogue does not cause gastric distress- as the extended length of the alkyl side chain alters the solubility and causes differential dynamic binding at the TRPV1 (43-44,50-52). The desired effects mediated through TPRV1 of this analogue remains equipotent to that of pungent capsaicinoids with shorter side chains (51).

Take twice daily – Mix 1 scoop with 10 ounces (295 ml) of chilled water first thing in the morning on an empty stomach, and on training days, consume 15 minutes prior to exercise.
Avoid eating or consuming a protein shake within 20 minutes after consumption.

Be the first to review “VANGUARD SCIENCE – LIPOFLUX” Cancel reply 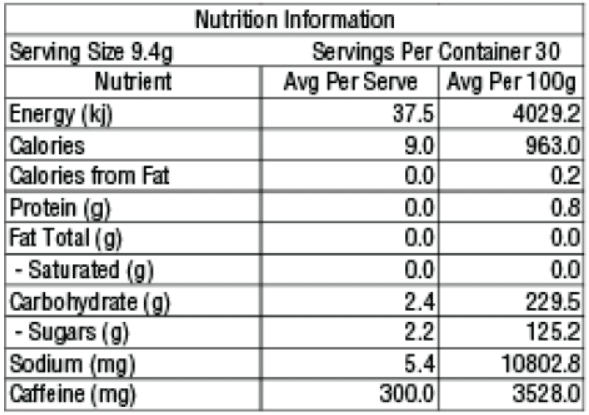